Christmas Tamales: A Tradition for Everyone 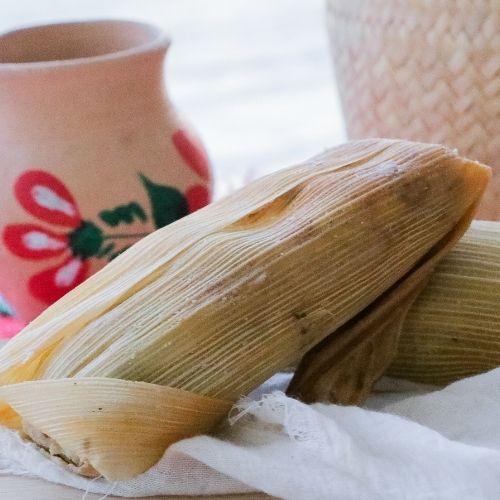 This time of year, eating tamales can be everyone’s tradition, if you are lucky enough to get some or have the time to make them.  The year my family made Christmas tamales was the year I unwrapped a tradition diverse in flavor and Latino culture.

Made from scratch, tamales are an endeavor that take a couple days and require the help of lots of hands.  This is why when you do make tamales, you make a lot of them to eat, put into the freezer for later and share.

Friends and family all join in the tamale making fest know as a “tamalada”.  Making the chili sauce, slow cooking the pork shoulder with garlic and oregano, soft cooking the beans with vegetables, and stirring together the masa or cornmeal dough so it can sit overnight, all has to be done first.

Assembly calls all clean hands into action.  The masa is first spread into a corn husk, then filled with spicy, savory or sweet filling before being wrapped into a package for steaming.

Tamales are a Latino tradition between December 12th the Feast of Our Lady of Guadalupe and Three King’s Day on January 6th.   In addition to Christmas, tamales also celebrate baptisms, first communions and wedding anniversaries. (Test your knowledge of holiday food traditions from around the world with my Cultural Holiday Quiz.)

The making of tamales dates back to Mya, Aztecs and Inca cultures before the common era.  Older still, the Olmecs and Toltecs made tamales because they could be taken on travels throughout Mesoamerica.

Most often ground corn or masa is the essential ingredient.   The ancients believed that the gods made humans from corn and celebrated creation with tamales made with a corn dough.

Each region from Mexico to Columbia to southern Argentina has its own signature style of spicing, filling, wrapping and saucing the tamale.  The recipes very between Latino cultures and even families.

Tamales were not always associated with Christmas, and have not always been made with corn.

The dough is stuffed with meats, cheese, beans and/or vegetables.  The ingredients are wrapped in corn husk or banana leaf wrapper and steamed.  It’s served hot typically with a chili sauce or salsa.

The merits of a traditionally made tamale or two, may surprise you!

In the U.S., masa flour is available specifically for tamales.  Corn is soaked in calcium-rich lime to remove the skin before it is dried and ground.  Some of the calcium stays on the masa.  Naturally gluten free, masa gives us energy.  Though the corn flour does have some of the fiber, it’s not considered a whole grain.

Steamed, tamales are cooked tender and moist with no added fat.

This year, make the tamale tradition part of your holidays.   Here is a healthier recipe to try.  BYO family and friends.