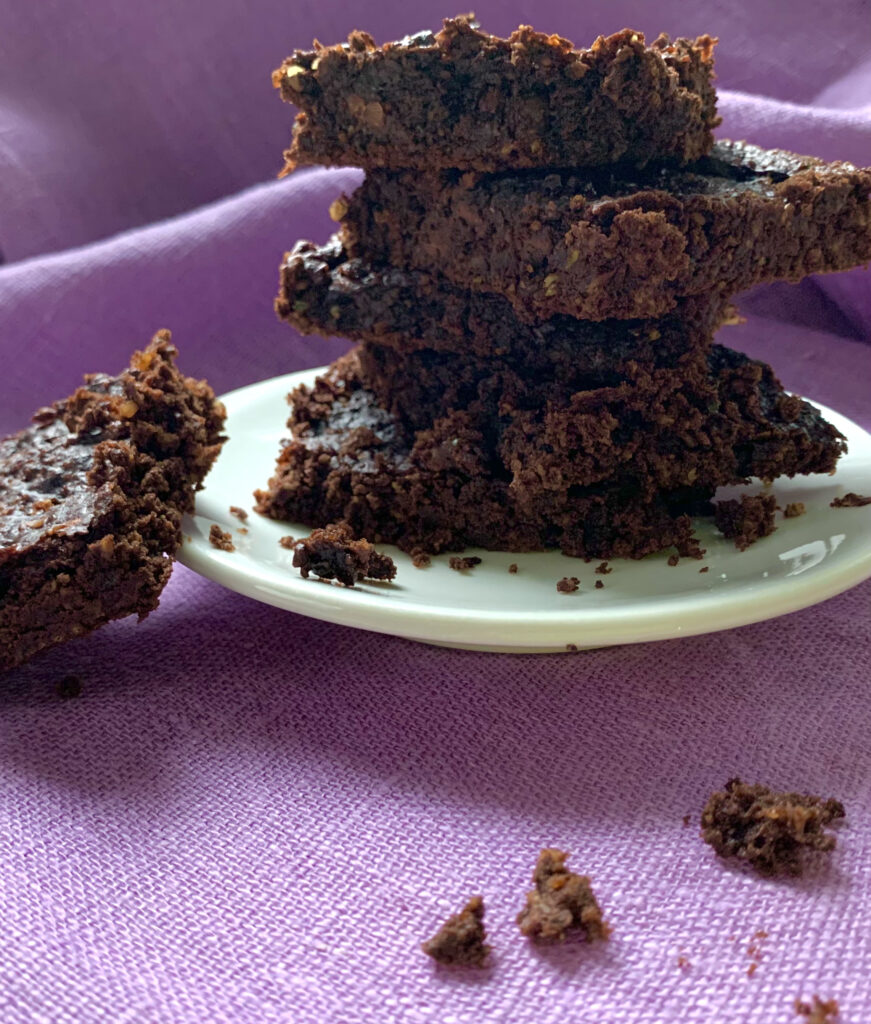 I’m going to try it…Luanne’s going to try it…”  Hey, let’s get Doug to try it…he’s not big on vegetables, but it’s chocolaty, and he like brownies…” This was the conversation today in the WCHE1520AM Morning Magazine studio.

This EASY zucchini brownie recipe is for you.

But before you try it, I know you want to know, “Did Doug like it?”

I have to tell you, the reason I made the brownies, contrary to popular belief, was not to get Doug to eat a vegetable.  A couple weeks ago, I kicked off the Academy of Nutrition and Dietetic’s and the Academy Foundation’s Kids Eat Right campaign on my radio show, Libby’s Luncheonette. We talked about great cooking videos, kid camps and cooking and the conversation just lead to this super chocolatey recipe for zucchini brownies.

I simply wanted to let listener know where they can find the recipe and how delicious it really is.  (Doug, you can thank the several listeners who requested the recipe for my inspiration.)  Though there was a good chance Doug wouldn’t like it, I figured if Mikey, I meant Doug, liked the brownies, everyone would really know how scrumptious these zucchini brownies are.

Taste tested by Doug Stirling, Luanne Fox Simms and me on-air during the WCHE1520AM Morning Magazine, I put this better for you zucchini brownie to the test.

There was nothing sneaky about the tasting.  I was transparent with how they were made and that one of the ingredients was zucchini.  Through the studio glass, I could see Luann’s face light up, as we watched Doug skeptically weigh out the balance of ingredients in relation to the zucchini.

Luanne described it best.  It was as if Doug was holding up a hand-held scale and mentally placing each ingredient into the dish on one side or the other.  In one dish, the just shy of two cups grated zucchini went “thud” as it hit the floor.  Then I listed the other ingredients and could see Doug placing them one by one into the opposing dish of his approval scale.

Without coercion, threats, pushing or blackmail, Doug took one of the bite-sized pieces.  Luanne and I were silent as we watched on in anticipation.

I commend Doug, he didn’t smell or lick it first.  He bravely popped the bite into his mouth.

He chewed. He swallowed.  He didn’t hold his nose.

“Ahem, it’s good,” he reported.   Like Mikey, he likes it.  He reached for a second bite-sized zucchini brownie.  He likes it!

Doug liked the zucchini brownie.  He didn’t need further convincing.  I didn’t have to pitch that these brownies could be made with gluten-free oats. Or that they didn’t contain dairy or eggs.  And, he couldn’t tell that there was even one shred of zucchini in the brownies.

I didn’t have to sell that the oats and dates were good sources of fiber, especially soluble fiber, which can help lower cholesterol.  There was no closing the deal with the numerous antioxidants from the whole grain oats, dates, zucchini or chocolate, which may play a role in reducing inflammation and preventing cancer.

There was no mention of how these chocolaty brownies were better for him.  He just liked them.

If you want to get in on the conversation, catch the trending news and start your day with a smile and good friends, listen in to the Morning Magazine every weekday from 7:00-10:00 am on WCHE1520AM, and also heard at 95.3FM.

Better for You Zucchini Brownies

Grate the zucchini onto a plate and set it aside.

Into a food processor, blend the oatmeal into a course flour.  Transfer it into a bowl and set it aside.

Into a food processor, measure ½ cup of whole pitted dates.  With the dates still in the ½ cup measure, fill the ½ cup with warm water.   Add both the dates and the water into the food processor.  Blend until mostly smooth.  Stop and scrape down the sides and blend again. There may still be some pieces of the dates.

Into the food processor add the nut or seed butter, honey and vanilla.  Add the oatmeal flour.  Sift in the cocoa powder, baking soda and salt.  Blend into a course dough.

Add the zucchini and half the chocolate chips.  Blend until everything is incorporated.

Using a spatula, scoop the dough into the prepared pan.  Spread it evenly into the corners. Sprinkle the remaining chocolate chips over the top.

Bake a 9 x 13 pan for 15 minutes and an 8 x 8 pan for 25 minutes or until a knife can be inserted into the center and comes our almost cleanly.

PrevPreviousA Case for Growing Your Own
Next10 Nutrition Mind Set ResetsNext